Posted on November 6, 2017 by Mark Calzaretta

This is one of the TANKS of the 45 ACP World. The pistols are built tough, have a very well designed recoil spring system and offer factory standard magazine capacities of 10 or 12 rounds. 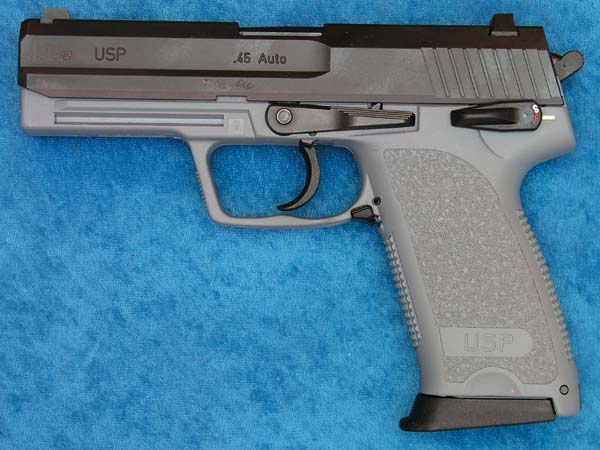 The standard frame color is black. However, HK did produce frames in Grey, OD Green and Coyote Tan

The full size USP 45 is capable of firing 45 ACP, 45 ACP+P and 45 SUPER with no changes to the Firearm. I have no idea what the life expectancy of a USP 45 is, but I can tell you it will be up there.

Being a 45 SUPER fan, I was very pleased to find such a stoutly built auto loader.

The one drawback to the HK DA/SA trigger system is that if feels mushy (for lack of a better word). It certainly is not a target grade trigger and it is not easily altered. This firearm is built for combat as it leaves the factory.

Upon disassembly, I found that the HK followers had very long legs that prevented them from traveling all the way down the magazine. Changing out the follower for one of the ParaOrdnabce followers yielded an increase in one round. ParaOrdnance has different styles of follower so I found one that turned the HK magazines into 14 rounders, I also found a 14 round follower that would not work correctly part of the time. If you convert your magazines, be sure to do complete testing for reliability before using them for carry.

After using more than a dozen different styles of FMJ and premium defensive hollow point ammunition I found that the HK like them all.

The full size USPs that I worked with all delivered very good accuracy from any of the factory loads that I tried.