I realize that most of the xGrip lineup of products is for firearms that are not 45s.

However I have had some recent interaction with the company that deserves a mention.

In this Internet age, we are always fast to complain, yell, and boycott companies when a company turns out a lemon. We need to be just as aggressive when a company goes above and beyond to take care of us.

So here is my tale of these products that came out to fill the gap between the bottom of the firearm and the base of a larger than normal length magazine.

They did this task VERY well. Continuing the contours, shapes and often texture of the firearm they were being interfaced to even though this meant a custom product for each application. 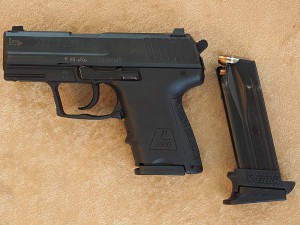 The oldest xGrips that I posses are for the the Heckler and Koch P2000sk pistol. I have no idea when I acquired them but I have had the pistol for 11 years now.

Two weeks ago I pulled this firearm from the safe for a show and tell session that I was getting ready to do.

I had a second P2000sk stored in a different location with a few xGrip equipped magazines, they were in the same condition.

I immediately took this up with the manufacturer that admitted there had been a bad batch of material on occasion in the past and the products would be replaced. In about a week, 6 replacements arrived and are back with their firearms. 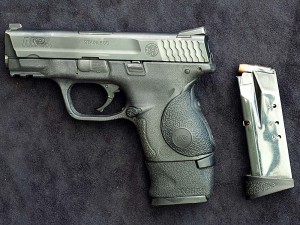 So Kudos to xGrip for standing behind their product so well.

Halloween is just two weeks away 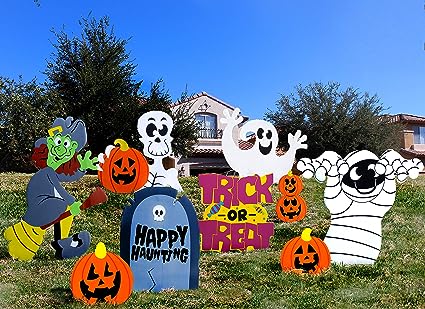 When thinking about incorporating our love for firearms, especially 45s into a costume, A 20′s gangster is the obvious choice.

A pinstripe suite, Fedora and a 1911 or a Tommy gun and we are good to go.

But carrying a Tommy gun around gets tiring, they weight over 11 pounds with an empty magazine. Not to mention that the prices on even the semi-auto versions has risen over the years

Enter the folks at 1022FunGun.Com 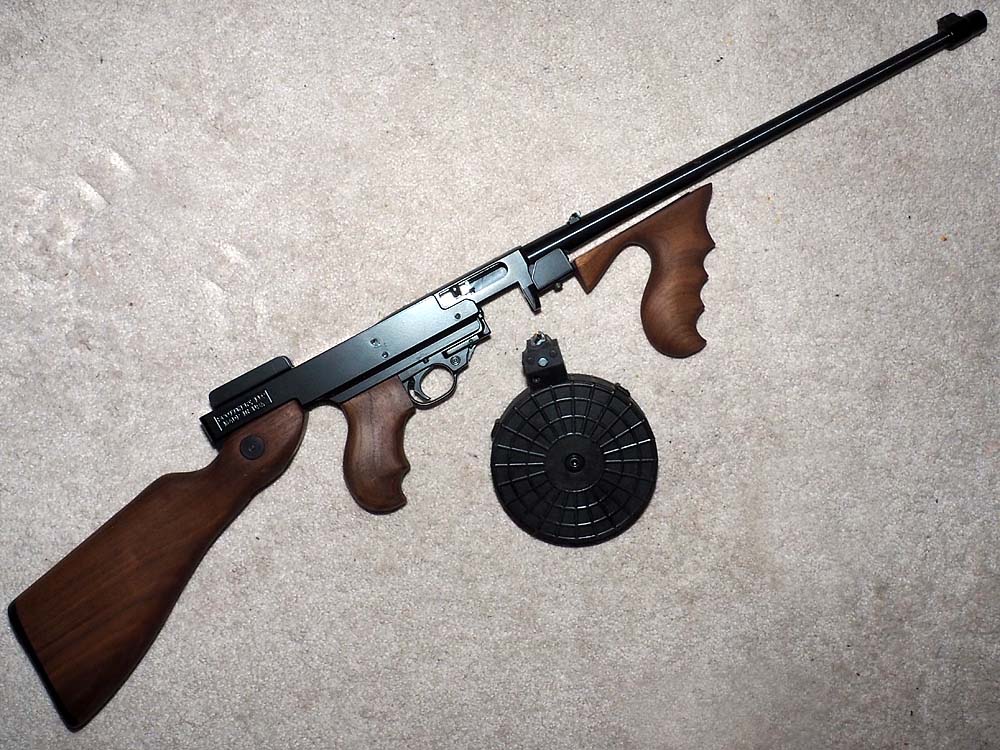 These kits are available with either the Vertical or Horizontal forend. The magazine I am using in the photo above is a Pro Mag drum for the Ruger 10-22 style firearms. The folks at 1022FunGun.Com do offer a dummy stick magazine adapter that makes your factory original rotatory magazine look like oce of the old factory 45ACP sticks

I guess you guys now know what I am planning for this year’s Halloween. Just remember to dress the kids in bright colors for good visibility

My Chronographs through the decades search stops at LabRadar

Posted on September 8, 2018 by Mark Calzaretta

Going back to when I first started hand loading, I always wondered how close was a getting to the performance of Factory Ammunition, how consistent were my hand loads, so back in the early 1980s I bought my first Chronograph. It was a Ohler Model 33. It had a one lien LED display. It cost me a big chunk of my paycheck, but I was going to learn more about my ammunition.

It served be well for many years and then I came upon the CED Chronograph. This one had some memory in it and a serial cable to connect to my computer to dump data. It even spoke out the velocity for everyone to hear. I had a second set of infra red skyscreens for it that would work well at indoor ranges. It was a very cool package

I reviewed the Magneto Speed unit a few years ago. This one used no skyscreens, a magnetic sensor knew when the projectile flew over it.  Unfortunately since it had to be attached to the barrel to get the sensor close enough to work, it was a poor choice for hand guns. 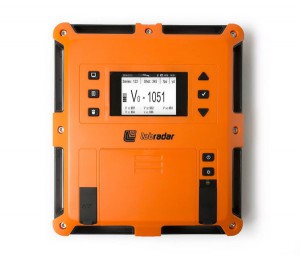 Then we come to the LabRader. This is a Dopler Balistic Radar unit. Thee is no setup required, just set the unit next to you on the shooting bench and you are ready to go. The unit has an SD card slot so it will write thousands of strings of shots to the card for computer transfer. It calculates everything on the display, it creates a file for each shot showing the velocity at each radar reflection, about every 13 microseconds. There is so much data that you can even calculate the ballistic coefficient of the projectiles.

As cool as it was when I got my first Chronograph, these was the next level. Faster setup and take down, works under any lighting condition, provides Much more data and easier to work with.

There was one thing that always caught my attention, the units settings include bluetooth.

Well with the most recent firmware release (about 2 months ago) we can now turn that on and do all the control and parameter settings from a smartphone App. LabRader just upped the game one more notch 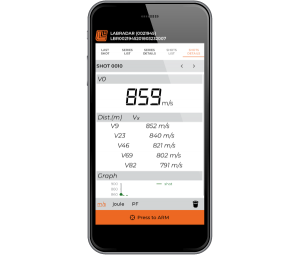 With this App, they turned the tedious up arrow/down arrow movement for setup to something that is fast, easy and logical.

Plus now we can look at our data while we are eating lunch without having to keep a laptop on the table.

If you are considering an upgrade or replacement to your existing Chronograph you should give serious thought to acquiring a LabRadar.

Yes it cost more then the fold up ones, but this is a seldom in a lifetime investment. It is worthwhile

Not too long ago Federal Cartridge released a strange looking new ammunition line under their American Eagle brand name. 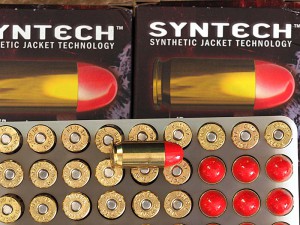 They called it SYNTECH and it looked like lipstick.

While the word polymer is not used, it is a nice synthetic coating over the lead core 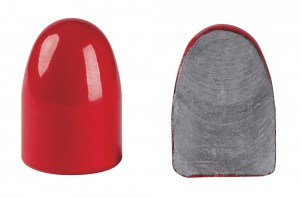 The initial caliber offerings  are 9MM Parabellum, 40 Smith and Wesson and 45 ACP.

These three calibers were offered in their standard weights and bullet profile. Federal sent me a supply of each of these initial offerings however today we are going to address the 230 grain 45 ACP

As expected some of the claims are no leading, easier cleanup and better velocity due to less friction. The less friction claim also adds that this will keep the firearm cooler.

The manufacturer claims a muzzle velocity of 830 FPS. This is about the standard for a round that is loaded to SAAMI pressure limits.

Well we test fired the ammunition in a variety of firearms. A LabRadar unit. These new Dopler Radar chronographs are faster to set up and easier to record data from. 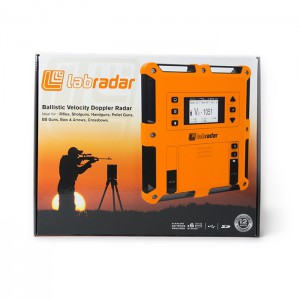 All firearms were shot in 5 round strings. We went once around the group of firearms and then did a second string from each firearm. The data from the two strings was averaged. 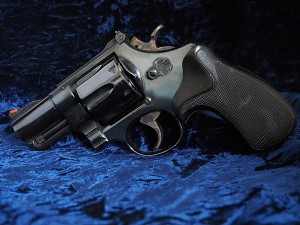 We started with the shortest barrel on hand, an older 2 3/8″ Smith and Wesson Model 25 Behlert conversion.

The snubby revolver turned in an average MV of 711 FPS. I was not shocked by this combining the short barrel with the barrel/cylinder gap of a revolver. 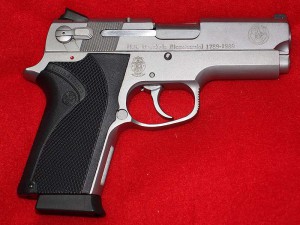 OK moving on to semi autos. I had a couple of short autos with me, a Smith and Wesson 4516 along with an HK USP CT. These two pistols turned in 772 FPS and 758 FPS respectively. Since the HK was set up for a can, I decided to see what kind of numbers it would turn in. With a Osprey 45 suppressor in place, the USP 45 CT firing Syntech ammunition hit 806 FPS, a velocity gain of 6% . . . Interesting 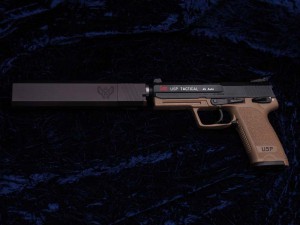 We happened to have a full size HK USP Tactical on hand so it was also thrown into the mix.

The larger pistol turned in 746 FPS and 816 FPS without and with the suppressor. Slightly slower numbers proving once again that barrel length is not the only thing that affects muzzle velocity 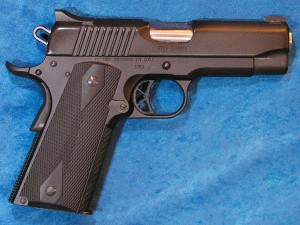 The final pistol that we had on hand that afternoon was a Kimber Pro Carry.This is just a run of the mill 4″ 1911, not one of Kimber’s Custom Shop guns. The Kimber turned in 779 FPS.

If we had run the Synthec through a 5″ auto loader I am sure it would have reached the advertised velocity. However, these days most folks carry the shorter firearms

Every firearm provided good groups that were to point of aim. As the advertising told us, clean up was much faster than if we had been shooting traditional lead projectiles.

Include your Children and even the neighbor’s kids if they happen to be at your house for the festivities.

I would bet money that none of the kids that attend public school have ever heard this document read aloud. 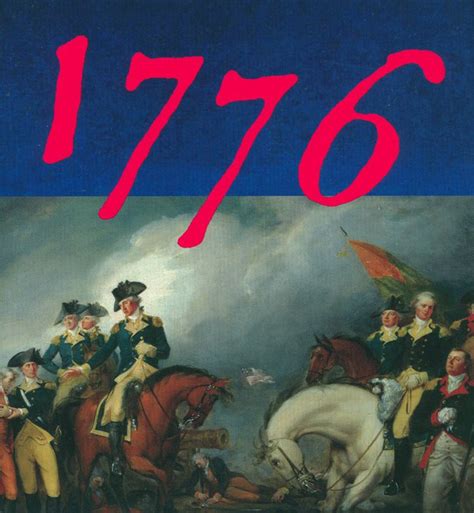 These are things that our children MUST learn about lest our Future Leaders repeat the same mistakes that England made over 242 years ago.

There is much talk in modern days that we should become more progressive and abolish things like the Second Amendment to the Constitution as being unnecessary. Just remember that without personal firearms ownership, we would not be Celebrating Independence on this day.

So enjoy the “Bombs Bursting in Air” tonight after the sun goes down, just NEVER forget how we got here and what it means to be AMERICAN

Posted in Politicians and their ways | Leave a comment