I have to say YES.

While it is true that in 1872 when the cartridge was first conceived it was named the 45 Colt, I have seen brass headstampped 45LC. There is also much historical basis for the 45 Long Colt name over the past 80 years now.

We need to go back to just before World War I when Remington introduced the 45 Short Colt which was also known as the 45 Government.

If you look in a copy of Cartridges of the World you can learn more than what is in my short post here.

Ammunition boxes were labeled with one of the two names, but both were available. The 45 Colt and 45 Short Colt have exactly the same case dimensions with the exception of length as can be seen in the photo below. 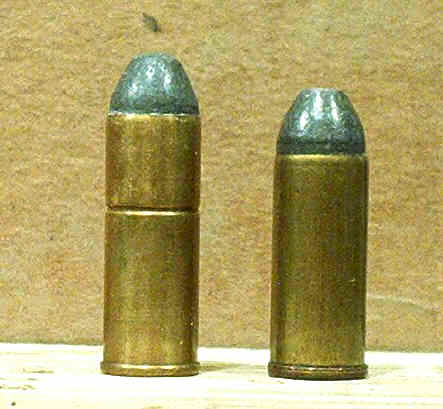 This cartridge was produced in large quantities until sometime after World War I. It would not have been unusual for a man to walk into the General Store back then and wanting to buy box of 45s and have the store clerk ask “Long or Short?”

While the 45 Short Colt is no longer on the shelves of our local emporiums and it is no longer necessary to use the word Long when asking for 45 Colt ammunition some of us just like the sound of it. You know nostalgic.

Professional Photographer, Firearms Enthusiast, Instructor and Gun Smith. Due to my love of fine mechanical things I am also a car enthusiast and horologist
View all posts by colt_saa →
This entry was posted in Miscellaneous. Bookmark the permalink.